PeniMaster® PRO Weight Expander System is bodybuilding for the penis.

The specially produced, solid round weights made of stainless steel are screwed to a base weight of 250g for the adjustment of the weight on the penis. By combining the weights, defined pulling forces, up to the recommended maximum load of 1250g, can be adjusted in steps of 125 g (contained in scope of supply, can be expanded by additional weights).

PeniMaster® PRO Weight Expander System is bodybuilding for the penis.

A recent study concludes:“The use of the PeniMaster® PRO – Penile Traction Therapy, a non-invasive treatment and provides a significant reduction in the curvature, an increase in penile length and a significant improvement of the symptoms and bother induced by Peyronie’s Disease.” (Moncado et al. BJU International 2018) 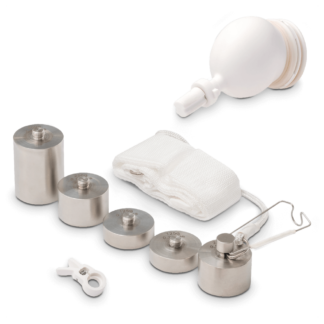